Forty-six years ago, this month, a Beethoven bust vanished from Chicago's Lincoln Park.

Prior to its mysterious disappearance, Ludwig's likeness had graced Lincoln Park gardens for seventy-four years, 1897 to 1971.

The garden that the Beethoven bust once adorned is sometimes referred to as the English gardens and hosts a bronze of the English bard, the Star of Poets, William Shakespeare.

Beethoven was purposefully placed close to and facing the Friedrich von Schiller statue (1886), which faces the Lincoln Park Conservatory and formal gardens.  A 'dialogue' between the two portrait statues was sought since Schiller's poem "Ode to Joy" (written 1785) inspired Beethoven's final complete symphony, his Symphony No. 9 (composed 1824).

Both works rapturously celebrate the unity of all mankind. 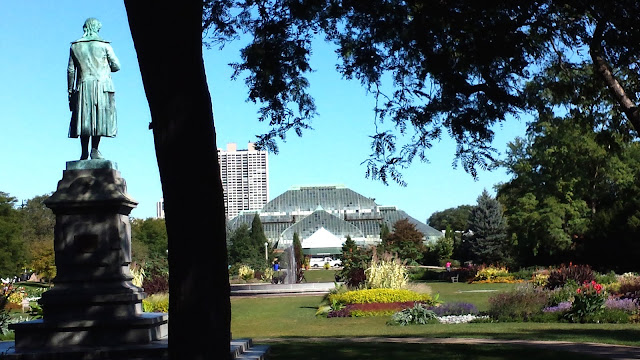 Reportedly, the Beethoven bust had inscribed on its pedestal, "Alle menschen werden brueder," All men become brothers, words from the chorus of Beethoven's 9th symphony as well as from "Ode to Joy."

The benefactor of the artwork was Carl Wolfsohn, a Chicago music teacher and conductor.  On the day of the unveiling on June 19, 1897 he spoke to the crowd and said,


"My heart is full of gratitude that fate has enabled me to give the city of my adoption and its people this gift.  Beethoven's genius has been the safeguard in my long musical career...I have felt it a thousand times what Beethoven said of his own music ...., 'I fear not the fate of my music; it cannot fare ill.  He who comprehends it will be free of all woe which burdens others."