The oldest statue in Chicago's Lincoln Park commands a remote lakefront location, slightly north of Diversey Harbor. This life-sized, naturalistic bronze depicts an Ottawa family of Indians, the mother, the father and the baby with a wolf-like dog.** 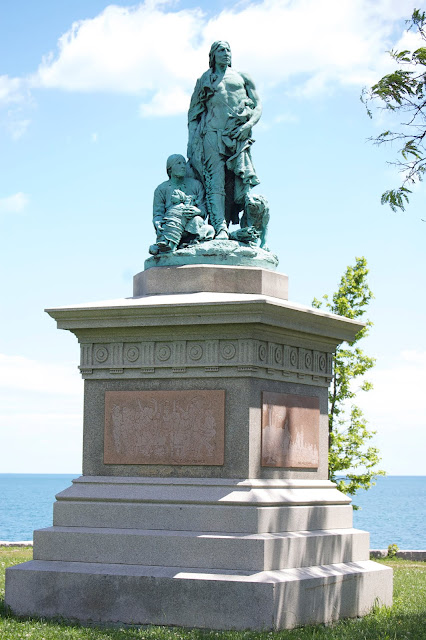 An old photo shows that the bronze is not in its original form. 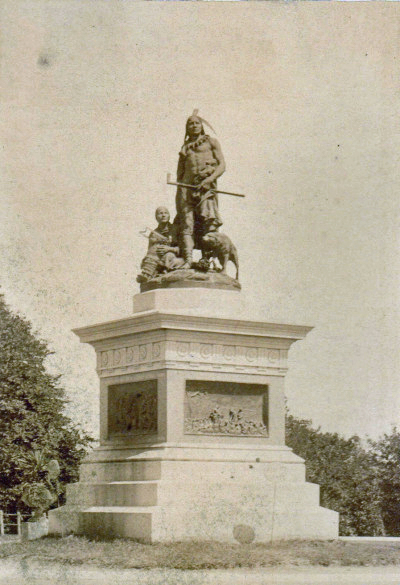 Feather forms once decorated the male figure's headpiece. A collar adorned 'his' neck, perhaps suggesting a necklace of bear claws.  Reportedly a tomahawk was held in hand, although old photos reveal what looks to be a peace pipe. 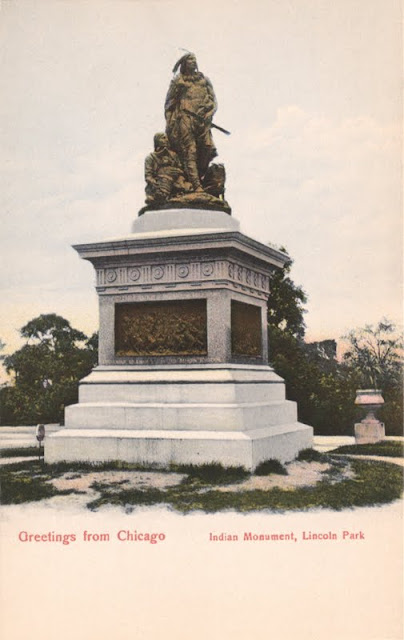 A handle or guard, barely visible in either image, was attached to the papoose. 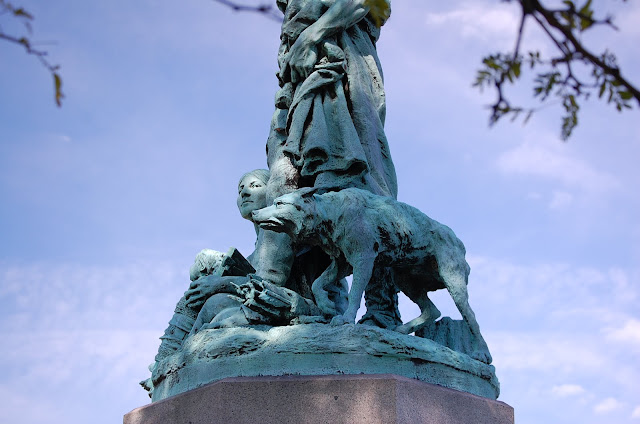 From my own visits to the statue, it's obvious the dog's tail is also broken off.

Originally bronze bas reliefs, pictures that have sculptural form, decorated the base.  Three of these original reliefs were reportedly stolen.  Pink-granite incised reliefs replicate the original images and are titled The Corn Dance, The Peace Pipe, Forestry, and The Hunt. 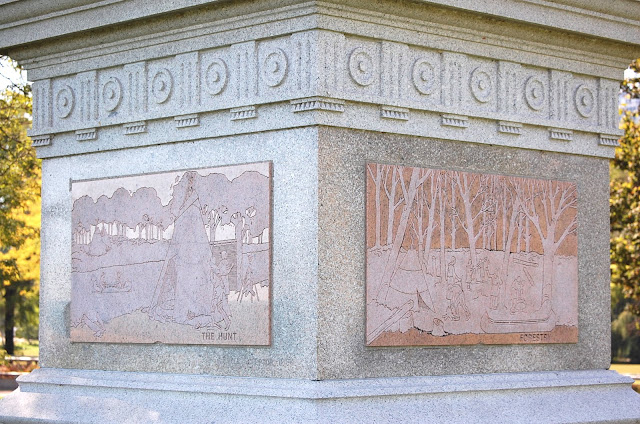 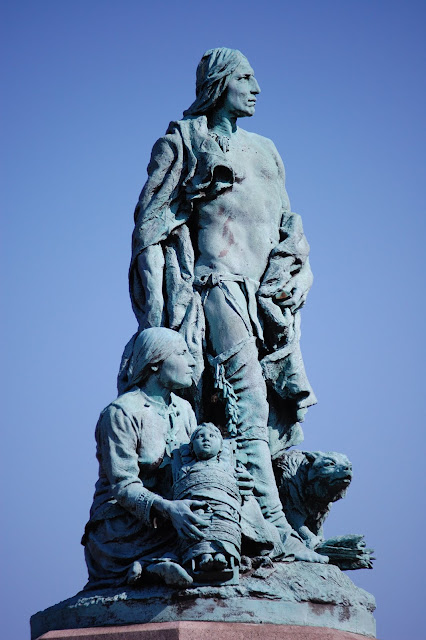 One is likely surprised to learn that details are missing because it appears entirely whole and remains a dignified representation of a noble people who once inhabited this Great Lakes region. 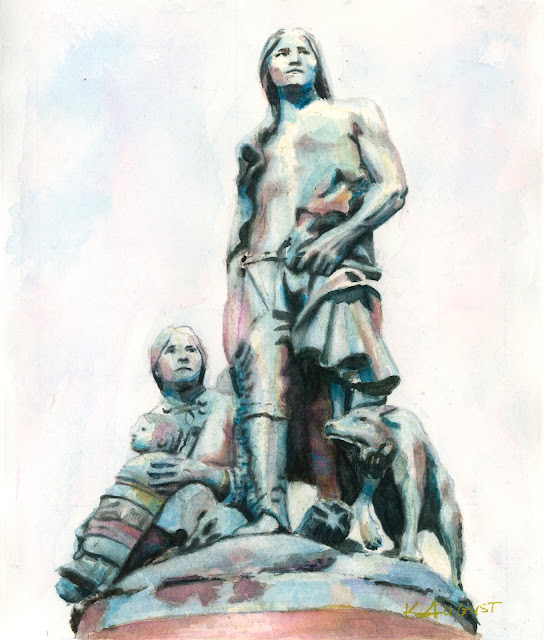 The monument is titled The Alarm and was donated to Lincoln Park by Martin Ryerson (1818 - 1887), who commissioned New York-born artist John Joseph Boyle to honor his early friends.  As a young man, Ryerson had traded furs with the Ottawa Indians. 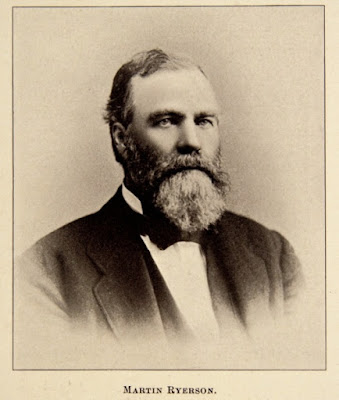 In creating this commemorative art, Ryerson involved himself to ensure a sympathetic and historically accurate portrayal. 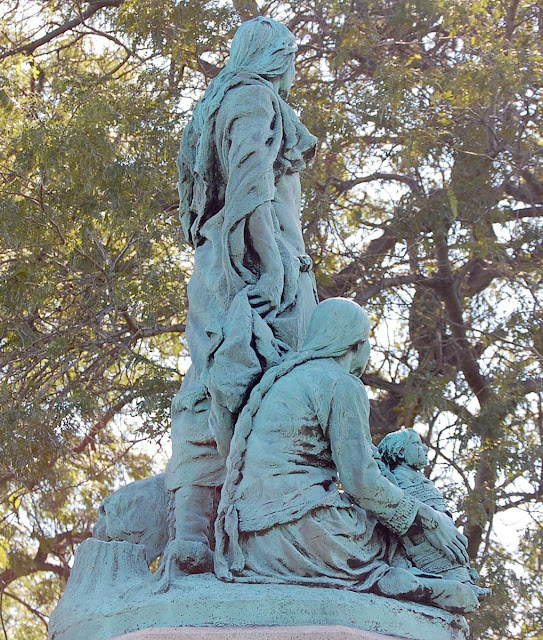 Ryerson spoke at the 1884 unveiling ceremony before one hundred of Chicago's early citizens and said in part:

"I have caused the construction of this statue to commemorate the Ottawa race of Indians with whom I spent several years of my early manhood.  While with them I saw much that was good and noble and I looked upon them as my friends.  There are but few white people now living who understand that race as I did a half a century ago . . . I therefore hope ... that this statue will serve to show posterity for all time to come the opinion in which some of his co-existent white men held the Indian."


The success of The Alarm inspired Philadelphia to commission Boyle to create an Indian group for their fair city.  Consequently, he rendered The Stone Age, which depicts an Indian mother with two babes and a bear cub at her feet.

*Chicago is derived from an Indian word meaning “place of wild onions.”

** The Alarm is also the oldest statue on Chicago Park District land, in terms of being the earliest installation.

Posted by Krista August at 09 May No comments: